Thank you for checking out AD2 Suite! In this guide you'll find all the information you may need to use AD2 Suite, whether it's for basic use or for customisation and better understanding of internal MIDI and audio handling. On the bottom of each chapter that covers a device, there is a paragraph in which is explained what's inside the device that makes it work the way it does.

AD2 Suite is basically a toolbox that allows you to interact with Addictive Drums 2 in a different and more convenient way. Use Push to insert or record notes into the Drum Rack sequencer with a clear overview of all the kit pieces. Instead of setting velocity values manually in MIDI clips the old fashioned way, use simple Macros to control the velocity values that are sent into Addictive Drums 2 in real time, or through automation. To add extra liveliness to the drums, you can let the Ghost Note Generator come up with ghost notes for you.

To start using AD2 Suite, unpack the .alp file somewhere in your User Library, or in one of your custom folders in Live’s Browser. From here you'll then be able to easily access the AD2 Suite project folder.

The AD2 Suite project folder contains two project files (.als), one for users who own Max for Live, and one for the users who do not. When you unfold one of the project files, three choosable presets will be revealed: 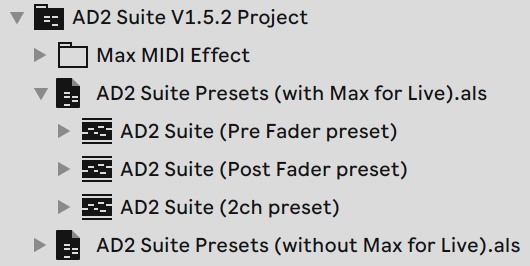 Once you know which preset you want to use, simply select and drag it from the Browser onto an existing MIDI channel, or into the empty drag and drop area ("Drop Files and Devices Here)". Once dropped, four devices will be loaded into the channel and displayed at the bottom of the screen.

The most right device is a Drum Rack named AD2 Push Layout. The Addictive Drums 2 plug-in lives in the Kick pad/chain of this Drum Rack device. Simply select the Kick pad, and if it wasn't already, the plug-in should come into view. Click on the wrench to open the plugin.

The plug-in has no kit loaded in by default. In fact, all kit pieces and parameters have been reset, enabling you to build up and configure a kit from scratch, or pick a kit to your liking. As soon as you've built or loaded a kit, you're ready to start playing. 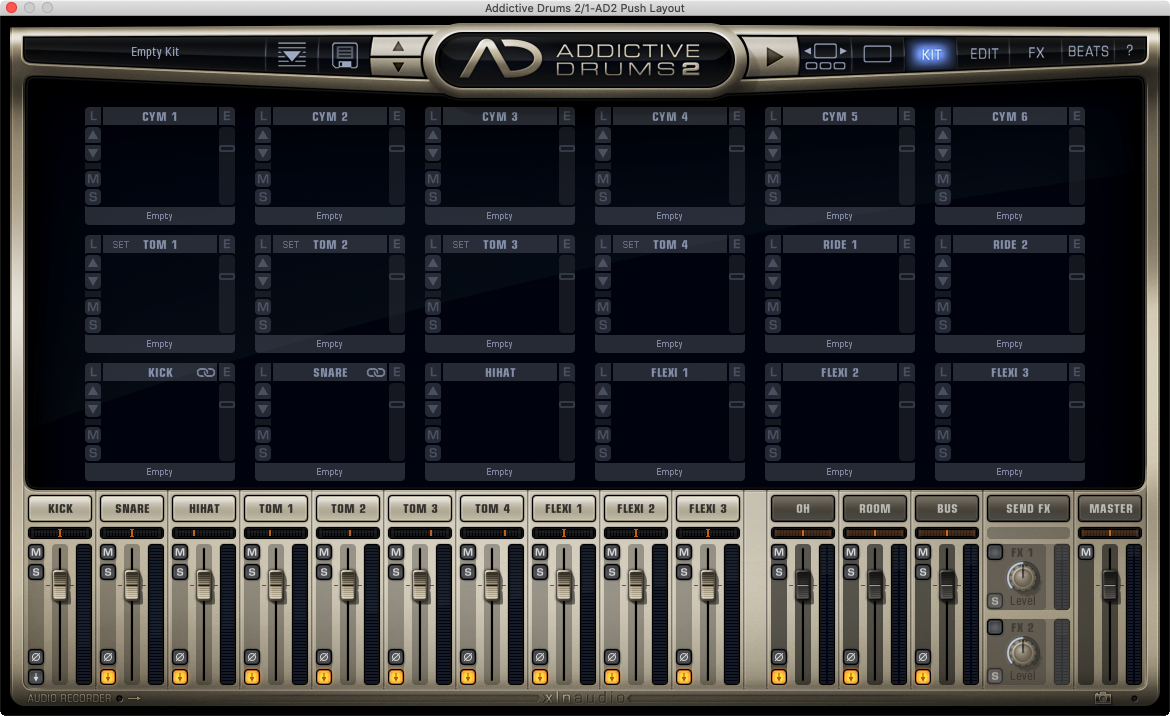 Every now and then SoundSuite's devices receive updates.
To check if you're still on the latest version, right click AD2 Suite's project folder and click Show in Finder/Explorer.
Once the folder is revealed, double click the www-Check For Updates.url file.

Right click the project folder to reveal URL files in the Finder.

To ensure that all of AD2 Suite's devices will work correctly, keep the map preset set to “unknown”. This map preset corresponds with the MIDI mapping of all other devices, so that means that if you want to change the mapping of the Drum Rack, you'll have to change it for all the other devices as well.
If the default map preset does not fit your taste, there is a video on YouTube where I explain how AD2 Suite works and how to make your own Drum Rack preset for Addictive Drums 2.

To access the Map Window of Addictive Drums 2, open the plug-in and click the "?" in the top right corner of the plug-in window. Then, select "Map Window". 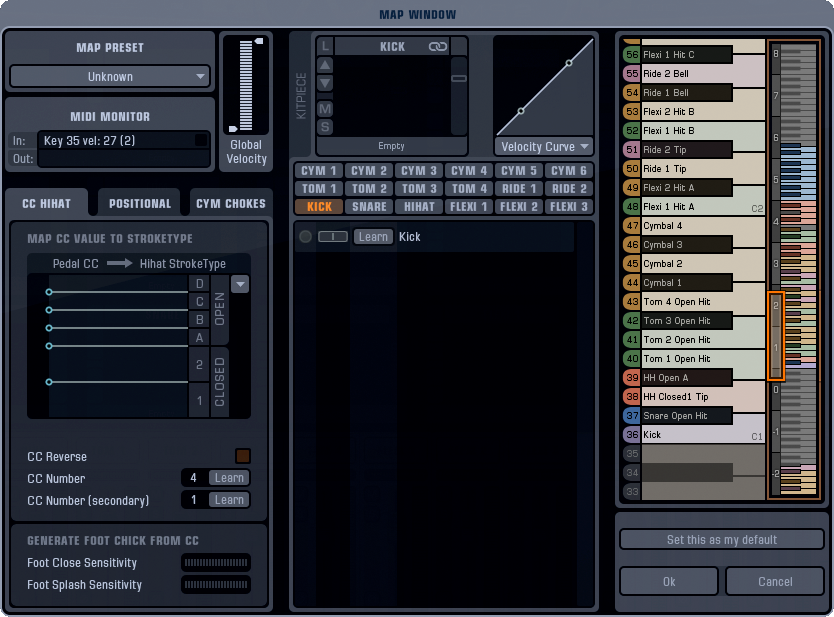 Hover over any of AD2 Suite’s Macros to reveal information about their usage in Live’s Info View.

While in the Step Sequencer mode on Push, the bottom left 16 pads offer a collection of the main kit pieces so you can easily build the main beat. Switch to the 64 Pads mode to get access to all the other drum hits that Addictive Drums 2 has to offer.

In the images below you can see what each pad and color represents. 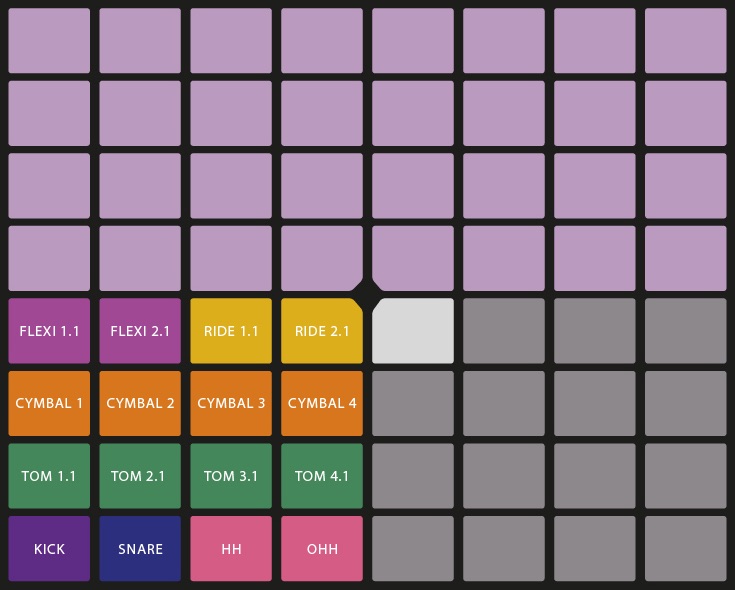 The Loop Selector mode with the step sequencer and 16 pads for the main kit pieces. 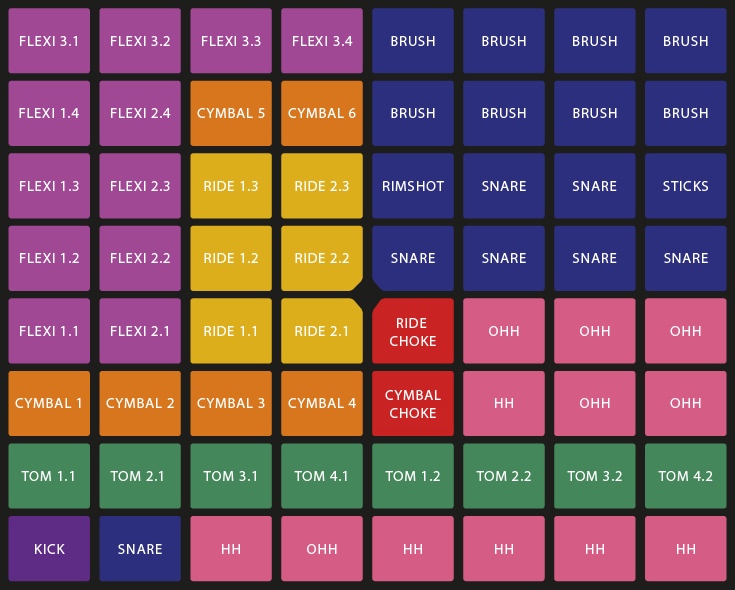 If you do not own a Push, that doesn't mean you can not use AD2 Suite. Everything works like a normal Drum Rack. Once you create an empty MIDI clip, you will see a long list of all available sounds and you can draw, or record notes using any other MIDI controller.

By default Addictive Drums 2 has its own MIDI mapping preset called “AD2 Standard”. In order for the MIDI patterns from the Beats section inside Addictive Drums 2 to be imported correctly, a custom MIDI mapping preset had to be made that corresponds with the routing inside the Drum Rack. This is what happens in the I-O settings, which can be accessed once the Chain List is visible. From here you can see which note is played, and to which note it is redirected to trigger the right corresponding kit piece.

In the Map Window of Addictive Drums 2, on the right side you can see exactly which kit piece responds to which MIDI note.

MIDI routing inside the Snare Chain.

By default, Addictive Drums 2 has separate choke MIDI notes for each cymbal (6) and ride (2). To make things more compact and easy to use, one single pad is routed to all cymbal choke notes. The same applies for all ride chokes.
Pressing a choke pad however sends out only one MIDI note at a time, therefor all the choke Chains have Arpeggiators on them with random a-musical timings. These Arpeggiators trigger all choke notes many times within a few milliseconds to make sure all Chokes are actually triggered inside Addictive Drums 2.

All cymbal, ride and choke routing happens inside the Overhead Chain.

Routing inside the Overhead Chain, showing Arpeggiators on the Choke Chains.

Each of the 8 macro knobs in this MIDI Effect Rack control the Drive parameters of Ableton's Velocity MIDI effect. Intensity Control houses 8 of these Velocity MIDI effects. Each of the instances have the "Drive" knob mapped to the different kit pieces. You can automate these knobs like any other, or map them to physical knobs on a MIDI controller. 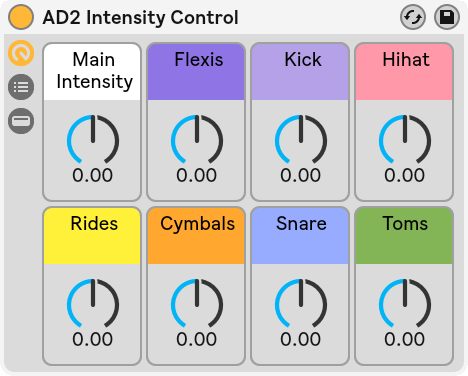 Once the “Show Devices” button is turned on, two Velocity effects and another MIDI Effect Rack are revealed.

For this part, the Flexis chain is used as an example:
There are 5 Chains inside the MIDI Notes Filter (Flexis) device. This is because the notes that trigger the Flexis are spread out over the Piano Roll, due to how the notes were mapped in Drum Rack. Because you can not split a key mapping Zone, multiple Chains and Zones had to be created in order to group all of the Flexis notes together, so that the output will only contain the notes of the Flexis. There are no devices inside the MIDI Notes Filter (Flexis) device.
The remaining MIDI notes will pass through the Flexis Velocity device of which the Drive parameter is mapped to the Flexis Macro knob of the Intensity Key Map Rack device. That same Macro is then mapped to its parent Flexis Macro.
This process is repeated for all the other kit pieces.

Since this device is an exact copy of the AD2 Intensity Control (with the exception of the Floor/Ceiling Velocity effect), there isn’t much explaining to be done. The only real difference is that each Macro Knob is mapped to its related Velocity Random parameter, instead of the Drive parameter.

The velocity value is randomized within the margin determined by the Macro. For example: if the input velocity is 60, and the Macro is set to 10, the output value for each individual note is a random number between 50 and 70. This results in a more dynamic drum sound as a larger variety of samples with different intensities are triggered in Addictive Drums 2. 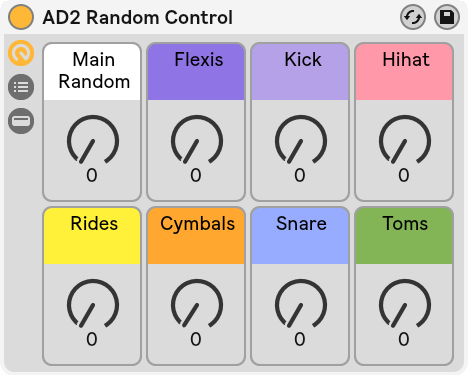 By default the Ghost Note Generator does not generate any ghost notes. This is because the Max Velo(city) Macro’s have been set to 0. Increasing these values will determine what the highest possible velocity value will be for generated ghost notes, thus controlling the intensity of the added notes at the same time. The velocity values for the ghost notes will automatically be randomised slightly for a more realistic sound.

Chance Increase
As 1/24 and 1/32 ghost notes are more scarcely generated by default, opening this Macro will increase the chance that these divisions are generated.

Disperse
As the GNG generates its ghost notes using arpeggiators, a possible negative side effect is that you get a string of ghost notes, all playing in sequence. Disperse gets rid of this effect as every generated ghost note will go through a chance-based selector. The further you open the Macro, the more ghost notes will be dispersed.

Displace (Chaos)
This Macro randomises what kit pieces are triggered by generated ghost notes, thus inducing some form of chaos.

There are two factors at play which determine what MIDI notes are allowed to generate ghost notes.

The Max for Live LFO MIDI device is what is causing the randomisation. It is located in the Main Feed Chain, at the bottom of the list. The LFO modulates the Chain Selector at an a-musical rate, set to 0.64 Hertz. As the Chain Selector scrolls by, it generates 16th ghost notes all across at varying velocity values, while generating 24th and 32nd notes more rarely.

The Max for Live LFO MIDI modulates the Chain Selector.

All Chains but the Dry Chain contain an Arpeggiator with the Rate matching the Chain’s name. Whenever the Chain Selector scrolls by a Chain’s Zone, it are these arpeggiators that generate the ghost notes. Behind each Arpeggiator are three Velocity MIDI effects:

Displace (Chaos)
This Macro is mapped to the Steps parameter of every Arpeggiator in GNG. The Distance parameter of the arpeggiators is set to +2 semitones. This means that for every generated ghost note (with the exception of the first ghost note), will be pitched up 2 semitones. The process re-triggers with every new initial MIDI note. Therefor, Displace (Chaos) has a stronger effect on long initial MIDI notes, especially 1/24 and 1/32 divisions, as they generate notes more frequently.

Each Chain contains a MIDI Notes Filter device (shown above), followed by an Arpeggiator and Velocity effects (shown below).

If you do not own Max for Live, this means that the Chain Selector inside the Ghost Note Generator is not modulated as the LFO MIDI device is disabled. To counter this, modulation will have to be hand drawn inside an existing MIDI clip. An example is present in the “Basic beat” clip in the presets labeled “Without Max for Live”. Here’s how to do the workaround yourself: 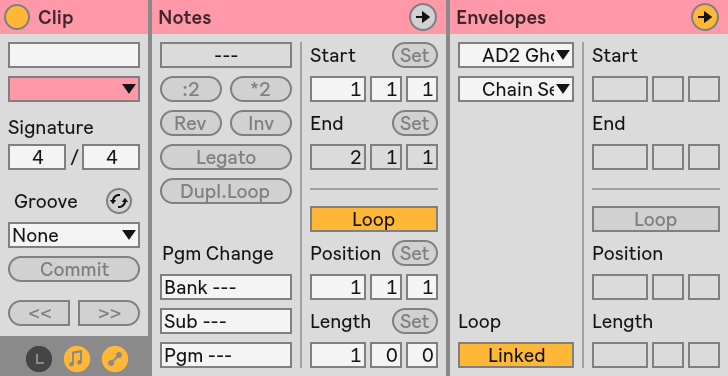 The Envelopes Box in the Clip Editor.

Unlinked envelope in the MIDI clip with an a-musical length. The line starts at 0, and ends at 127.

The Chain Selector now has a red dote next to it, showing that it is now automated. Once you trigger the clip, the Ghost Note Generator will now generate ghost notes as intended.

When the Chain Selector is automated correctly inside a MIDI clip, the result should be similar to the animation above.

Because the Chance Increase Macro is mapped to the LFO’s Rate and Depth parameters, this Macro will be disabled when Max for Live is not installed.